Countless, untold miracles took place at Calvary where Jesus Christ shed His blood, took upon Himself the sin of all the world, and bore God’s punishment and wrath (Isaiah 53:4-6), His body broken as a sacrifice (Luke 22:19), a ransom for many (Mark 10:45). Every prophecy fulfilled. Every Old Covenant law satisfied. Even though Jesus Christ knew of all these good things, He still struggled with the daunting task set before Him. In Hebrews 5:7, the author wrote, “In the days of His flesh, Jesus offered up prayers and supplications with loud cries and tears to Him who was able to save Him from death…” And in the Garden of Gethsemane He prayed, “Take this cup from me…” (Matthew 26:39) That’s because He was fully human and experienced all the same emotions we all do. The difference is that Jesus didn’t give His emotions the permission in His life that many of us do. They didn’t control Him and His emotions were always godly in motivation and expression. What a challenging thought!

Even at Calvary, a time of deep turmoil and pain, abuse, humiliation and fear, Jesus asked the Father to “Forgive them” – those who caused and rejoiced in His suffering, because He knew the deeper purpose. Jesus knew the blame for His punishment wasn’t on the Jews or the Romans, it was on sin. Those heaping pain upon Him were operating under its influence, ignorant of the freedom He’d come to bring. Even in His worst and most painful, agonizing moments, He never lost that perspective. As Jesus carried His cross toward Calvary, and His friends and disciples watched in horror, weeping at the sight of their Messiah and friend beaten, broken, and bloodied, Jesus spoke these words to them, “Weep not for Me…” (Luke 23:28) “Weep for yourselves and your children,” He said. Why would He say something like that? Because that was what He would weep for.

When Jesus stood overlooking the city of Jerusalem, He broke down and wept for the sin and darkness in which the world suffered. He knew He had come to bear their suffering, but that many would never accept such a beautiful sacrifice. He knew many would continue on trapped in religion, tradition, abuses, injustice, pain, addiction, fear and war and worse- heaping those things onto the next generation and the next and the next. That is why Jesus said, “Weep not for me, but weep for yourselves and your children.”

Jesus knew His death would be for but a moment because the resurrection was soon to come! Death defeated! Eternal life had come! The punishment for sin satisfied! The mouths of sin, hell and the grave were shut forever, for all who were covered by His blood! Jesus wept because His greatest desire was that none should die, but that all should repent (2 Peter 3:9) not because He was sad or angry or wounded. We cry for all the bad things that happen in our own lives, yet Jesus said, “weep not for ME…” Jesus never cried over His own circumstances and never wanted tears to flow on His behalf, for His suffering or pain. He wants us to weep for the lost and dying world, as He did. He wants us to observe the world around us and cry out the message of the peace He came to bring! “If only you knew what would bring you peace!” Jesus put that message into our mouths. We now carry the cross. But for whom do we weep?

[Read this next: “He Knew and Came Anyway”]

Satan would love nothing more than to keep the Christian endlessly trapped in all of the things Jesus came to bring freedom from, weeping for ourselves from from despair, depression, injustice, loss, fear and more. Even as we lay dying, can we call out, “Weep not for me”? Can we weep for the same reasons Jesus did? This will be one of the greatest challenges any Christian will ever face! What’s the secret to success? “Seek first the Kingdom of God and all these things will be added to you.” (Matthew 6:33) – Jesus promised it. He had a Kingdom perspective of His life, His purpose and His power. “Weep not for Me…” Jesus said as He carried His cross. Can we do the same?

Finding the Presence of God Through Praise 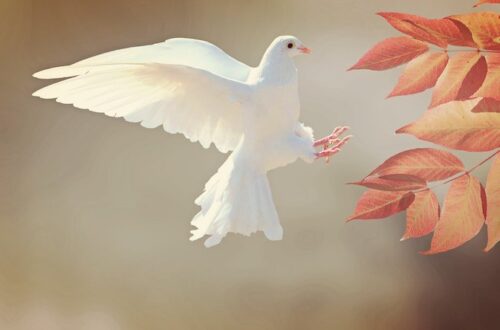 Knowing God More: 10 Things That are Not in His Nature

Examples of Faith in Action Will Challenge Your Faith