Praise and worship are spiritual weapons in the fight against the enemy because they strengthen you from the inside, from a spiritual place. The Lord dwells within the praises of His people (Psalm 22:3) and in His presence is everything you need. Peter wrote that, “His divine power has given to us all things that pertain to life and godliness through the knowledge of Him who has called us by His own glory and excellence.” (2 Peter 1:3) This is why Satan tries so hard to disconnect you, distract you and discourage you in your worship. This is also why it’s so important to kick your worship into high gear when you’re in a fight of faith.

Remember, no battle season in your life is against “earthly” powers or against “flesh and blood” – every battle season that you enter into, no matter in what form it takes, is – at its roots – a spiritual one. This is why you must become an expert at fighting with spiritual weapons– the Word of God, the power of praise and the authority of Jesus’ name in prayer. But there is another spiritual weapon that many don’t realize they have in their arsenal: Another Christian!

Seasoned Warriors Know How to Help You Win!

When you’re facing a season of battle in your life, there is no need to fight alone! In fact, in Joshua 8, the Lord told Joshua to go up against the city of Ai, known enemies of the Lord. But He didn’t expect Joshua to fight by marching around the city seven times like he’d done at Jericho, where even women and children could march. This was a different battle and required a different strategy and a totally different type of warrior.

This time, the Lord said, “Take the people of war with you.” The men Joshua chose were those who were known men of valor, already experienced in battle. They didn’t need training. They were already those who could travel under stealth by night and knew how to set an effective ambush. Those men of war set such an effective trap for Ai that, “they had no power to flee this way or that way” and they were entirely wiped out. “So Joshua burned Ai and made it a heap forever, a desolation to this day. And the king of Ai he hanged on a tree until evening.” Ouch.

This is why we need each other! Christians, at various points in their journey of faith, are all potential soldiers for the fight, and we will all experience battle seasons in your faith, but when you need something obliterated, when you plan to fight to the death for your family, your marriage, your kids, your unsaved loved ones, a health concern, a wound from the past, freedom from addiction and worse, you need to find yourself warriors. Surround yourself with “people of war” – people who know how to fight and win through the battle seasons. They’ll help you wipe out the enemy in that area of your life! There are people in your life right now who you’ve seen win. You’ve heard their testimonies. You’ve seen their miracles unfold. They’re experienced in war. They’re godly, fierce people of worship, and the Word. FIND THEM. Humble yourself and get vulnerable. Ask them to help you fight, and to teach you what they know. Do what they do, and the next testimony of victory will be yours!

Remember that the weapons you fight with are not “natural” but are spiritual, as Paul wrote in 2 Corinthians 10:4-6. Becoming angry, flying into a rage, reacting in fear, swearing, medicating your pain with alcohol or drugs, become depressed and anxious, lashing out, holding a grudge or unforgiveness against another person, dirty looks, nasty things to say – those are natural weapons and you won’t win any battles with them. The “people of war” are people seasoned in prayer, worship, the Word and the war. They don’t flinch or hesitate even in the face of fear – of a negative report, or a harsh word, or all hell breaking loose.

They know how to stand their ground in faith. They know how to use spiritual weapons effectively. Their position is one of offensive attack, not defense. Whatever you’re facing in this battle season, take heart. You’re not alone. Find “people of war” and ask for help. Some fights can be won by just marching around in faith, but for other battles, you need a full frontal assault and to win that way, you must “take the people of war with you.”

Build Up Your Spirit to Fight a Spiritual Battle 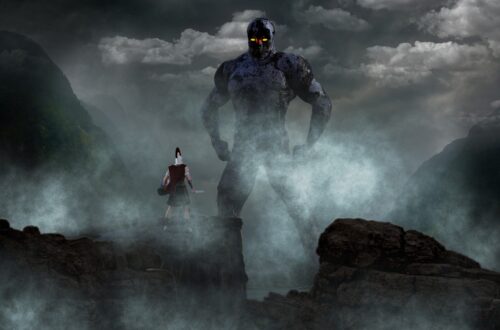 “IT IS WRITTEN!” 5 Ways to Use Scripture as Defense

The True Power of Praising the Lord of the Breakthrough

Praise God in Hard Times to Win the War!